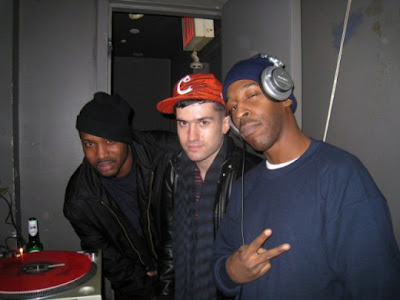 I can’t believe I’m writing another eulogy for a close friend and icon just a few short weeks after AM’s untimely passing. I apologize for taking a few days to write but quite simply, I had to muster up the strength again. The pain and sorrow that I have felt in the last few days are unlike anything I’ve ever experienced in my life. But I do it out of duty, because I owe so much to Raida and it’s so important for me to honor his legacy, so here goes…

At the very core of me, before all else, before the party rocking, before the producing and remixing, before the record labels, before Kanye, I am a battle DJ; a very ambitious one who strived to be the absolute best. When you’re this passionate about your craft, when it feels like your true calling in life, you have icons in whose footsteps you want to follow. Any battle DJ will tell you about the countless hours that they spent on a daily basis studying videotapes of the champs. When I was 13, 14, 15, that was Roc Raida to me. He was the 1995 DMC World Champion and I won in 97, so he was my direct source of inspiration. I remember the feeling that I got as a kid watching his videos: he had so much attitude and confidence. He was so fast. To this young Jewish whippersnapper from Canada, he was such an embodiment of New York and hip hop! Roc Raida just seemed untouchable.

The 1997 DMC DJ championship was the first battle that I ever entered, and in what felt like an eyeblink I was sent to the World finals in Rimini, Italy accompanied by my mom. I was 15 but looked about 11. As it turns out, that year DMC organized an extra event called the Summit where they invited all past champions to come together for a concert the day after the battle, so when I arrived in Italy most of my idols were actually there too. That’s where I first met Roc Raida and I remember my reaction like it was yesterday. Wow, he’s short! He’s actually soft spoken! And more than anything, he’s so kind, such a cool, laid-back and respectful guy. My mom loved him right away. I couldn’t believe that the great Roc Raida, the intrepid menace from the DMC videos, was actually talking to me like a peer and showing genuine interest in me. What’s more, I had just been snatched up by a rival crew! Just a month before, Q-bert, another idol of mine, invited me to join his prestigious Invisibl Skratch Piklz and of course there was friendly competition between the East Coast and West Coast DJs (ISP were from the Bay Area). Raida didn’t seem to care though. He met me when my career was just about to take off and we remained close ever since.

For years, every time I went to New York for a gig, usually accompanied by my big brother Dave, Raida would invite me to his house. He quickly gave Dave the nickname Stretch, for obvious reasons of lanky resemblance with Mr. Armstrong. He used to move around New York a lot so every time I visited it was somewhere different, from various parts of the Bronx to Harlem and back to the Bronx again. Dave and I would hop on the train petrified but inevitably he met us at the train stop. Like a pilgrimage I went to his house with my record bag and showed him my new routines. He showed me his, as well as his studio equipment and when he noticed something that I was fascinated with, he shared stories too. He always made time for this. I recall one trip in particular when I went by myself and he was a bit more pensive than usual. He apologized in the car, explaining that a close friend of his had just been sent to jail. I remember thinking “I can’t believe he still spent the afternoon with me.” But that’s who Raida was: he was selfless and endlessly giving. We also saw each other on the road a lot. At the time turntablism was experiencing a massive growth and we used to get booked across the world just to display these virtuosic routines for packed audiences. My first trip to Winter Music Conference in Miami was also with Roc Raida and his crew the X-Men in 1998. I remember getting driven to the hotel with him; he was obsessed with Scarface and he would peer out the window as we drove through South Beach, reciting every quote from the movie in his best Tony Montana.

Raida went further than just making time to hang out with me, though. I can’t even count the number of times he went out of his way to help me with my endeavors. In 1997 a few months after my DMC victory, my brother and I founded a record label called Audio Research in the prime of the indie hip hop revival. The Rawkus era. Remember when Company Flow’s vinyl said “Independent as fuck and loving it”? We ate that stuff up, and in that world the New York-based distributor Fat Beats was the powerhouse. Coming out of Montreal, Dave and I quickly got disillusioned by the politics of the Toronto-centered Canadian record industry. Dave’s plan was to go straight to the source and get a P&D deal with Fat Beats. It worked and, to my knowledge, we were the first Canadian label to do so, a point of great pride for us. How did we get Fat Beats’ attention in the first place? Roc Raida. Yes, Raida called Rich King and told him to listen to that demo that A-Trak sent. He liked what he heard and the rest was history. Nine years later when I wanted to make a song with Dipset and was growing weary of dealing with their multiple managers, I went to Raida and once again he made it happen.

As the years went by, inevitably every time I linked up with him he greeted me with the same questions: “How’s Stretch? How’s your mom? That’s good” with that close-eyed head nod of approval that any friend of Raida will know. I would ask him how his wife and daughters were doing and we proceeded to kick it like we always did. Eventually Dave moved to New York to study at Columbia. Not just anywhere in New York… Harlem! To Raida that was unbelievable. “I give him one year” he said, with his famous smirk. Proved him wrong. But after eons of hanging out without my old chaperon, we brought Dave back into the mix and our little posse was reunited. God’s Son had just dropped. My brother was starting to rock motorcycle jackets, tight jeans and a mustache. None of my hip hop friends knew about Chromeo yet. But to Raida he was still the same old Stretch, and he was thrilled to bring us to his favorite soul food spot Uptown. It was great to reconnect with him and his friends around that time, whether it be with Lord Sear, Boogie Blind or Sean C, who used to tell me stories about A&R-ing the first dead prez and Big Pun albums (a huge inspiration for what I do now with Fool’s Gold and Kid Sister). Raida was so proud of me when I got the Kanye gig. One time I was in Australia touring with Ye at the same time as Raida was there touring with Lord Finesse. I went to see their show and Finesse brought me out on stage unprompted. In moments like these, the fact that my Kanye shows were in front of roaring stadium fans took the backseat. In my heart of hearts, being acknowledged by Roc Raida and Lord Finesse meant the world to me. Around the time that I moved to New York, he moved to Maryland with his family so I didn’t see him as regularly in the last 2 years or so. But when he came back to play at APT with Boogie Blind I linked up with them (pictured below) and it was just like old times: “How’s Stretch? How’s your mom? That’s good.”

If you’re too young to know who Grandmaster Roc Raida was, that’s understandable. Maybe that title in front of his name will help situate him in the pantheon. He was one of the elite few DJs to literally get knighted by the pioneers of our culture. He DJed for Show & AG, Big L, Lord Finesse and in more recent years, Busta Rhymes. His group the X-Ecutioners (renamed from the X-Men) were the first turntablists to release an album on a major label. Think about how monumental that is. Raida recorded scratches on multiple classics, most famously on OC’s “Time’s Up” and Big Pun’s “Tres Leches”. And closer to home, he appeared in my DVD Sunglasses Is A Must… wearing a horse mask. I loved that dude.

I found out about Roc Raida’s accident the day after DJ AM’s memorial and I was completely shattered. It hit me like an anvil. I flew home to New York and the next day I went to visit him in the hospital in Maryland. I’m so glad I did. If I was able to show him how much he meant to me by doing so, then maybe, just maybe, I did at least a tiny fraction of my part for everything that he’s done for me in the 12 years of our friendship. Honestly that’s my only glimmer of consolation right now. He left us so suddenly, so inexplicably. I might never get over this.

Rest In Peace Roc Raida. A true mentor, a true friend and a role model. My heart goes out to his family and loved ones. I hope that one day I can mean as much to someone on a personal level as what he meant to me.

Thanks for him A-Trak

fitting tribute for such a great icon of hip hop,I learnt alot about him as a person from this insightful eulogy, thanks!!!

MUCH BIGGER THAN HIP HOP!! Very good words from A-Trak!!

much like this post states, raida was a huge inspiration in my life, as a turntablist. his untimely death was so sudden and so shocking that i'm not sure i'm going to be able to get over it fully for a very long time. he gave the tablist community so much, we have yet to fully understand the depth of his contributions. rest in peace roc raida. much repsect to A-Trak for the fitting words of love. Hip Hop and Turntablism will never be the same, now that Raida is gone. You will always be missed, Raida. Peace, Love, Respect. Mike "m. sain" Sains