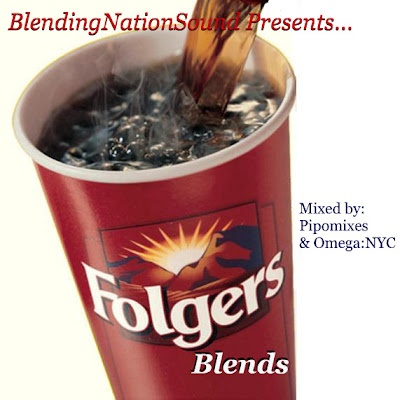 Several months back, my man Omega:NYC copped Taster's Choice 4 and sent a copy of this very hard to find mix my way. I've always been a fan of the Taster's Choice series, but I especially liked volume 4 because it focused on classic hip hop tracks that aren't your run of the mill cuts that you hear on every golden era mix. So in the spirit of Taster's Choice 4, we decided to pick-up where J.Rocc left-off with our own mix of classics that many of us forgot even existed. This isn't a "best of" the golden era mix because many of the songs on the mix aren't from the golden era. Instead, it is more of a "best of" joints that you slept-on or forgot about mix. As many of you are aware, the mix was initially titled Taster's Choice 4.5. But, as many of you also know, that title didn't go over very well. So, the title was appropriately changed to Folgers Blends. As with all of my mixes, a lot of time and thought went into crafting this effort. Please enjoy. Omega's explanation of the mix is below.

"This mix is for true heads that like hip hop and for all of those who miss that boom bap. The last track means the most to me because black baseball is just like hip hop. the greatest ones to ever do this seldom have their story told... peace to J-Rocc"

my morning transit to school is going to be great, i will have to take the long way but whats some gasoline nowadays

damn you killed it on this one! ive only got one listen in so far but im very pleased. but speaking of tasters choice 4 in the description.. im on a mad search for that and 6.. just throwin that out there

I gotta re-comment on this. On top of the dope mixing, the selection is SUPERB too!!! That trends of culture track is a good example of forgotten about tracks. This whole mix takes me back to when I was always so excited about gettin new music. This mix in particular reminds me when I was going thru air force basic training in San Antonio Texas at the time. Me and some of the people who I was in basic training with during the time would go hunting for this music on the weekends. We didnt care about anything else but this music!! I LOVE THIS MIX!!!

Can't wait. You know I'll drop this on my blog. Looks good just from the track list.

A good blend mix can be such gold if it's done right. Pipo never comes wack so it looks like my ears hit the lotto today. Good lookin, eager to peep this.

Glad everybody is enjoying the mix

you know i never told you how i felt about ur mixes and im like damn this mix is tuff it was a few mixes of yours were i felt like that so trust im greatful that i can find all kinds of music but i do feel your mixes shit its because of you im Beatjunkied out and a big fan of J.Roocc so please keep being the living example u r because this mix here is bangin

oh just wondering if you heard anything about a video of that Dilla tribute concert Suit For Ma Dukes?

Thanks for the kind words Jah.

If you google "suite for ma dukes dvd" you'll get a bunch of links that imply the cd contains a dvd of the concert. But when I click on the link and read more I read nothing about the actual dvd part. So I'm not sure what to make of it. You may want to try downloading one of the rapidshare links you'll find if you google it and see if it contains dvd footage.

Sorry, but that's the best that I can do