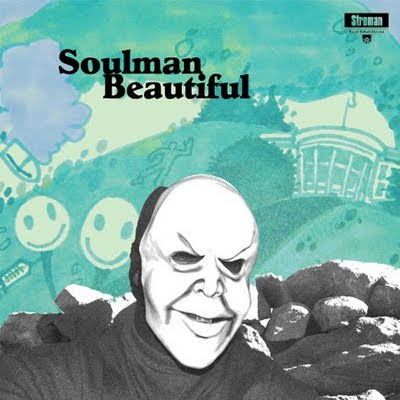 It's always a treat when the legendary Soulman drop another gem for us. Below is Soulman's explanation of the mix.

I was at the Old Country Buffet (one of my favorite eating spots- I'm cheap) awhile back and I noticed one of the employees, a barely legal if even legal at all young dude, hitting on a customer, a cute late 30-ish older woman. She rebuffed his advances, claiming that she was too old for him. Young dude, undeterred, stared her in the eye and calmly replied "I know what I like." Gotta give it to the youngin'- swag for days.
That's kinda how I feel about psych rock, which is my current favorite genre of music to listen to. I probably don't really know a damn thing about psych- every time I look up info on a psych album online, the reviews rarely sing the praises of the songs on the album that I like the most. They'll talk about the genius of some song on the lp that I'm not familiar with, then I'll go back to the record to listen to this song and be like WTF is this? Obviously I'm not hearing it from a true psych enthusiasts' perspective. Which I guess makes sense, since I'm a black first generation Hip Hop dude... I didn't grow up on Zep or Sabbath or the Beach Boys or Zappa or even Hendrix. I grew up on James Brown and Earth Wind & Fire and Stevie Wonder and the Furious 5.
Yet and still, I know what I like. Music with soul, music that touches you somewhere deeper than the epidermis. And any real music head knows that soul isn't just found on albums that have pics of dudes with afros on the jacket. I hear the soul in Aretha Franklin but I also hear it in Rachmaninoff's 2nd. In fact, "hear it" isn't the best way to put it- I feel it. That's what music is all about, man... people can tell you all day that this is the hot schitt, this is what's banging now, whateva whateva, but it doesn't matter. Music isn't a popularity contest, it's not about soundscan numbers, it's only about what you feel or don't feel. No matter what I say about something being THATREALSCHITT, if you can't feel what I'm feeling then it's a waste of time even trying to explain it.
So anyway, enough of my yadda-yadda-ing. Yes, it's true- I'm dropping another new Soulman mix a mere three days after the last new Soulman mix. Guess the hiatus is officially over, eh? This one, entitled Beautiful, basically picks up where The Truth Is Forever left off. Just playing a bunch of soft, mellow psych songs that I really love. Familiar folky stuff that the Vashti Bunyan and Linda Perhacs fans out there may already know and love but also some other very nice tunes that only the most hardcore psych dudes are gonna be hip to. This joint may be too light for the more gnarly real schitters, and my Hip Hop real schitters can probably just fuggetaboutit, but I'm hoping folks will dig this (Beautiful Pt. 2 and maybe even Pt. 3 are on deck already, so if y'all are feelin' it more will be dropped ASAP). Thanks for listening.

Dope mix, also much props on what you had to say! I feel you 100 on that! I'm a latino hip hop head and my music selection is far from being limited! I would say if this mix had just the instrumentals it would of made it even better! Not saying it isn't already, but just my 2 cents. Good work though, look forward to hearing more.
A-Men from Self X Cru...Chi-Town!

Yes we are definately feelin this one...its refreshing!!!

thanks for the heads-up

Gotta commend Stones Throw for clamping down on piracy. One of the main reasons they're more successful than any other indie hip hop label out there.