Best of the Decade 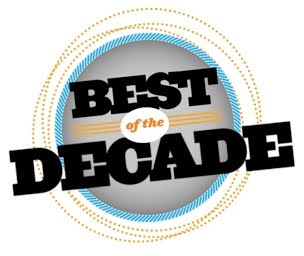 Here's some reading material for a Sunday morning. I don't know why, but I got inspired to do one of these "best of" lists. Feel free to tell me how dumb I am. We'll get back to our regularly scheduled mix programing tomorrow.

1. Donuts - J. Dilla - I've never been a big fan of instrumental albums, but this album was absolute genius. So simple, yet so complex, this album fathered the new millennium style of loop based production.
2. Supreme Clientele - Ghostface - Top notch production + Ghost's masterful offbeat flow = classic. Just played this bad boy the other day and it played beautifully from beginning to end.
3. Blueprint - Jay-Z - Arguably Hov's best album to date. The fact that this album brought back sample based music to mainstream radio makes it worthy of this list.
4. The Unseen - Quasimoto - I know this album is going to take some heat for being on the list, but I'd be lying if I said 10 other albums got more play in my tape deck/laptop/ipod over the last 10 years.
5. Fantastic Vol. 2 - Slum Village - To be honest, I was a little let down when I first copped this album back in 2000. Not that I didn't like the album at first, but I think it was just impossible for SV to live up to the hype at the time (at least in my mind). However, this album has aged better than fine wine.
6. O.S.T. - People Under the Stairs - Another controversial choice, but this album makes the list for much the same reason The Unseen did. I'll take this album against any hip hop album from the post 2000 era.
7. Game Theory - The Roots - In my opinion, this is clearly the Roots' best album since Things Fall Apart. Top quality production, second to none lyrics, and next level sonic quality.
8. Late Registration - Kanye West - This album can't be denied. Personally, this is my favorite Kanye album. Again, Kanye gets a spot on the list for bringing sample based music back to the masses.
9. Let's Get Free - Dead Prez - Very slept on album. I'm not really sure why their subsequent releases haven't even come close to touching the magic of Let's Get Free, but one classic album is one more than most.
10. Madvillainy 2 - Madvillain (M.F. Doom & Madlib) - The original LP was dope, but the remix LP took it to a whole new level for me. I'm nowhere near a Madlib groupie (I swear), but somehow two Madlib produced albums made the top 10. More impressive, at least three other Madlib produced albums could have easily been included in this list.

Best Movies of the Decade

1. City of God - I don't know if it was the setting of Brasil's favelas, the grimy cinematography, the psychopathic nature of the movie's top villain (Lil' Ze), or the abundance of pre-teen thugs shooting each other like it was going out of style, but something about this movie completely changed the game. To boot, the top notch soundtrack didn't hurt either.
2. Children of Men - I'm a sucker for apocalyptic films. Even better if the apocalyptic movie has a powerful message. The message driven home in this movie was that nothing is more powerful than the universal hope of a better tomorrow. And if that is gone, everything begins to crumble fast.
3. Inglourious Basterds - Frankly, nobody is f*cking with Quentin Tarantino. This movie was on some next level ish. Not to mention that the "Jew Hunter" character may be the best character ever created.
4. There Will Be Blood - Never has a character and actor carried a movie the way Daniel Plainview/Daniel Day Lewis carried this classic. Enough said.
5. No Country for Old Men - Anton Chigurh is the greatest villain in movie history. Any villain who has his own perverted sense of justice and goes around killing people using a cattle air gun, is gangsta in my book.
6. Kill Bill Vol. 1&2 - Again, Tarantino is just in a different league. The final scene of vol. 2 was priceless.
7. Traffic - There is just something about the grimy and depressing nature of this movie that I thoroughly enjoyed. No better pick-me-up than a movie about spoiled white kids having sex in crack houses, honest (or at least trying to be honest) Tijuana cops realizing their eminent violent death, and the seemingly hopeless War on Drugs.
8. American Psycho - You feel like a bad person for enjoying such a sadistic movie, but how can you not enjoy a serial killer who is pushed over the edge by a coworker's business card.
9. Adaptation - A movie about a character writing a book about a character making the movie about the character writing a book about the movie. Confused?
10. The Departed - The Irish Goodfellas, just not as good. But good enough to make the list. This movie makes the top 5 if the editors leave those lame love scenes between Leonardo DiCaprio's character and the shrink on the cutting room floor.

Best T.V. Shows of the Decade

1. The Sopranos - The Sopranos edges out The Wire for top show due to its limitless replay value. Some loved the show for the violence, some loved the show for its one of a kind characters like Silvio Dante, and some loved the show for its intricate plots. Whatever the reasons, it's hard to imagine ever watching a show better than The Sopranos. A brilliant presentation of the American Protestant psyche where, for good or bad, providing for your family justifies everything.
2. The Wire - No good guys, no bad guys, no absolute rights or wrongs, and no simple answers to complicated questions. As a matter of fact, no real answers at all. Just a marvelous series.
3. BattleStar Galactica - Best scifi show of all time. I'll admit that it was hard not to think of Edward James Olmos as SantaAna from American Me instead of Admiral Adama, but the show was a must see nonetheless.
4. The Chappelle Show - The Chappelle Show has a special place in hip hop heaven right next to The Arsenio Hall Show. Personally, my favorite skits were the Real World and Making of the Band spoofs. However, my favorite part of the show was the musical guests that would perform at the end of each show all hand chosen by Mr. Questlove.
5. 6 Feet Under - It's been a while since I last saw a rerun episode. However, I do remember that I once looked forward to watching this show every Sunday night.
6. Breaking Bonaduce - Few things have been more entertaining than watching the implosion of former child star turned self proclaimed street fighter, Danny Bonaduce.
7. Entourage - Eric Murphy may be a complete douche bag, but the male, L.A. version of Sex and the City is always worth some good laughs. Sure, it is progressively getting worse with each season, but it still deserves to make the list.
8. Jersey Shore - The series is only two episodes deep as I write this. However, it is pure comedy watching these Jersey guidos make fools of themselves all the while thinking that they are the greatest thing since sliced bread.
9. Cheaters - If this show is fake, then Robert DeNiro has got nothin' on these actors. If this show is real, than there are way too many white trash babies that should have been aborted who grew up to be sorry excuses for an adult. The stabbing of Joey Greco is by far the greatest t.v. moment of the last decade.
10. Charlie Rose - I'm not going to get on my high horse, but I will say that intelligent conversation is a good thing.

Top 10 Mixtapes of the Decade

1. Thank You Jay Dee Act 4 - J. Rocc - My favorite mix of all time. The perfect incorporation of Dilla beats, smooth as silk mixing, and effects galore.
2. Thank You Jay Dee Act 3 - J. Rocc - This was my favorite mix of all time until I heard Act 4.
3. Original - DJ Neil Armstrong - In my opinion, this mix changed the game. This mix forced every deejay to put more production value into their mixes.
4. Blunted with a Beat Junkie - DJ Shortkut - Reggae isn't easy to mix, but Shortkut sure made it look easy.
5. Cultura Copia - DJ Nuts - Any of DJ Nuts Brazilian gems could be inserted here, but Cultura Copia is the mix I've listened to most recently.
6. Rekonstructed Elements - DJ Shortkut - There are break mixes, and then there are BREAK MIXES. This one is the latter.
7. 2Original - DJ Neil Armstrong - I actually like this one better than the first, but the original gets ranked higher because it was Original.
8. Sex Machine - J. Rocc - The truth is that I could give all ten spots to J. Rocc's mixes, but that wouldn't be much fun would it.
9. Best of People Under the Stairs - DJ Foodstamp - It may not make your top 10 list, but this mix has been in regular rotation for the last few years.
10. The Pharcyde Mix - Bobby Evans - This mix is so good that it made my top 10 even though I'm not much of a Pharcyde fan.

Biggest Douche Bags of the Decade

1. Kobe Bryant - Tiger Woods made one hell of a late run, but Kobe's body of work over the decade cannot be denied. Tiger may have been outed by every b-level whore on the planet, but Tiger never did this....

2. Tiger Woods - Cheating on your wife is never a good idea. Being a billionaire sports icon who cheats on his wife with floozy waitresses and club promoters while text messaging them like some schoolboy who's never been laid, makes you a straight douche bag.

3. Every College Football Analyst Who Could Not Remove Their Lips from Tim Tebow's Scrotum - The Tim Tebow ball washing fest that occurred from 2006-2009 was simply out of control. Watching grown men drool over a 21 year-old virgin like he is the second coming is very awkward.

The albums and mixtapes list is probably the two best decade lists I have seen. I am so there about J Rocc being able to take the top ten for sure...his do-over set, the beat junkies take-over, sex machine, the dilla mixes, droppin science: blue note...the list just keeps going.

BEST MIXTAPE OF THE DECADE: "Love Junkie" by DJ Gaveegav...listen to it urself: http://www.homegrownblends.com/index.php?page=artist&details=Gaveegav

thanks for putting 2 of my mixes on your Top 10.