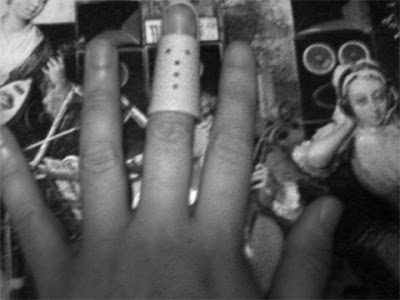 I remember Questlove was ranting and raving about this mix on his twitter a little while ago, but I was unable to actually locate the mix. I just found the mix yesterday courtesy of the people at 92bpm. Below is DJ Nikey's description of the mix.

I made the edits in the first part of 2008. I snapped a tendon in my middle finger prising one of my shoes off and couldn't play any instruments for a while, so amused myself making edits instead. I was playing around with The Roots's "Livin' In A New World" and created what I imagined was a Medieval vibe, which I liked and thought was unusual. Listening back I realised I'd stumbled upon a method of transforming the time signature of 4/4 tracks by removing the third and seventh quarter-beats (usually the snare hits), closing the gaps and sometimes adding some subtle echo. I applyed this to other hip hop instrumentals - some worked and some didn't. I told my friends, who were like "what?!", they thought the concept was crazy and inspired. I finished off the mix by doing some interludes from a nursery rhyme album and recordings of birdsong, gave out about 5 copies on cd, my busted finger healed and I forgot all about it.

Until now! It was a pretty long slog on Pro Tools but it kept me occupied. It's great to hear that people like it, not only for the concept but also for the sound.

Thanks again for the kind words.