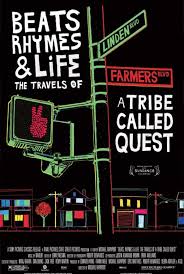 I have been eagerly anticipating the release of Beats Rhymes and Life: The Travels of A Tribe Called Quest, since the moment I discovered Michael Rapaport intended to make this film.  Like many of you, I have read most of the reviews and noticed all the reviews to be generally positive.  I won't waste your time by providing a review that recants many of the reviews already written by those bloggers privileged enough to see the movie earlier than me.  Instead, I am going to review the movie by reviewing those who have already reviewed the movie.  Confused?  Let me explain.

As most of you are aware, almost all of the positive reviews have had a slight caveat.  Numerous reviews (particularly from the hip hop perspective) have criticized Michael Rapaport for placing too much of the film's focus on the ongoing feud between Phife and Q-Tip.  Let me say that such criticisms are not only overstated, but they are immaturely childish.  As many reviewers have correctly pointed out, Rapaport does an excellent job in documenting the story of A Tribe Called Quest.  He does an extraordinary job of telling this story because Rapaport is a true hip hopper himself.  The film is filled with fascinating stories, archival footage, and subtle tidbits that will satisfy the most hardcore of hip hop culture enthusiasts (many of you on this blog).  By being a hip hopper himself, Rapaport knows what true heads want to see and he delivers it.

The feuding between Phife and Q-Tip naturally becomes part of the film because the feuding between the group's two frontmen is part of the group's story.  Ignoring the feud would not only equate to historical revisionism, it would simply be dishonest.  Those who have criticized the documentary for focusing too much on the Phife v. Q-Tip feud are probably the same kind of adults who still get upset that there is no Santa Clause or Tooth Fairy.  The trials and tribulations of the friendship between Q-Tip and Phife is emblematic of the challenges that any childhood friendship endures as the bond attempts to weather the storm adulthood naturally brings.

I experienced mixed emotions while watching this movie.  On one hand, the hip hop geek in me was on sensory overload as I saw a brilliantly executed documentary about one of my favorite groups of all time.  On the other hand, I was saddened to the point of anger when I realized that the film did not nearly focus on the feud as much as many of its critics claimed it did.  As I thought about this a little more, I came to the conclusion that much of the "feud" criticism is symbolic of the difficulty that hip hop culture has experienced during its not so graceful aging process.

The fact that so many hip hoppers (at least many of the influential ones) had a problem with the part of the documentary that displayed the challenges that all adult relationships experience, leads me to believe that either hip hoppers aren't maturing, or they simply won't allow their beloved culture to.  Either way, it's problematic.  Though the element of youthful rebellion that is intrinsic to hip hop culture may be what initially appealed to many of us, the culture embodies much more than simple youthful rebellion.  The original hip hop generation has not only grown into adulthood, but some of the original hip hoppers are now old enough to die of natural causes.  However, by the looks of the reviews that I read surrounding the Beats Rhymes and Life documentary, it appears that far too many choose to comment on the culture from the perspective of naivete.

To those who truly value the culture, the challenge is now focused on how to preserve our culture for future generations. One hundred years from now, hip hop will be lucky if it finds itself in a similar position to the one that jazz is currently in.  Sure, jazz is not generally considered mainstream music.  But, who wants that anyway?  Almost one hundred  years later, jazz still maintains a niche audience.  Not only is there a niche audience, but those who appreciate jazz music are generally the cultured and intellectual types.  Society typically holds in high regard those who appreciate jazz.  Does hip hop music have a similar future?  The answer is for us to decide. However, the future will continue to look glum as long as the culture's vanguard continue to demonstrate an inability to deal with mature subjects even when such subjects are dealt with in the most lighthearted of ways.
Posted by pipomixes on Monday, August 01, 2011

good review! Can't wait to get back to the states and see it!

Jazz is heritage music. If you didn't grow up with jazz, it's unlikely you will have an appreciation for it.

Hip Hop is pop music, and as such I think there will always be a place for it in mainstream music culture. Heavy Metal, Punk, Rap, Indie... all of these genres will be around in 100 years.

I would say it boils down to simplicity. Jazz and Classical are complex, nuanced, and highly narrative. Relative to jazz and classical, pop music is simple, direct, and distilled. I'm not saying there arent complexities to it, but clearly the genres are different.

With regard to the documentary, I'm looking forward to seeing it. There has been a lot of chatter about the feud aspect. My guess is that quite a bit of the footage is post-breakup, so naturally that is going to be skew the doc. My guess is that if all the footage were pre-breakup, it would be a different doc. But again... haven't seen it so I'm just speculating based on the trailer and what I've heard.

Well put Pipo. I too was thinking, oh, the feud wasn't as bad as early reviewers were making it out to be. The documentary is well put together. Can't wait for the DVD cause you know it'll have footage from the cutting room floor.

And speaking of Hip Hop having a similar future to jazz, I think this film is definitely something students of the future can pick up and inform them to the story that is A Tribe Called Quest.

How are we going to able to explain "It ain't no fun" to our grandchildren and great-grandchildren?? It's still gonna be around for some centuries....and "baby got back"...
It's part of human civilization now...

hmmmm We explain that "Ain't No Fun" is a metaphor for hip hop's emphasis on sharing and equality. haha

I saw the doc at Archlight opening week: what stylewars is to graff / the tribe documentary is to hop-hop

please check andre torres' comment on the future of jazz in waxpoetics' most recent jazz issue with george benson on the cover - pipo I know you know all about waxpoetics / jazz may be worst off than hip hop will ever be! El Matic is an example of how hip hop will rebirth itself. Jazz has a special place in my life and my crates but, the development and maturation of jazz music and the genre has almost come to a complete halt. I don't ever want to see hiphop become background music accepted by the masses as the backdrop for waiting rooms and elevators.... Although, I wouldn't mind it either!

Thanks for the heads-up on that WaxPo article. I'm gonna see if I can find a copy this afternoon.

Sad to say, but in some ways hip hop is already elevator music.

I think one thing to consider about Jazz is that it evolved dramatically during its time and it crossed-over with many genres. I would argue that Jazz completed its mission to explore the boundaries of improvisation and rhythm.

Jazz evolution... is definitely over in the formal sense. But if we look at how much it evolved from roughly 1920 to 1980, in some ways it was an umbrella meta-genre that went from big band swing to funky small group free jazz. If Jazz were to continue evolving... it would cease to be called Jazz.

Jazz will always be with us as part of the theoretical framework of music. As we move into the future, music artists will continue to reference and be inspired by it. But the tradition of live big bands and long, back-to-back, small-group soloing is definitely not making a comeback.

Any why should it? Jazz has two main traditions: big band and ensemble swing and small group soloes. Would either of those have a broad resonance right now?

Hell, we don't even do hip hop that well anymore. So forget about Jazz.

I did read the Waxpo editorial in that Jazz issue and that was running through my head as I wrote this post. The problem with hip hop has always been that we want the best of both worlds. We want to be accepted by the mainstream (remember the grammy boycotts?) but we don't want our music to get watered down as it goes pop. That simply isn't possible. I much prefer a committed core group of producers and consumers (like jazz) than what we currently have. My dream: taking my wife out to an upscale hip hop bar/restaurant where I can hear a dope dj and enjoy a nice meal (similar to what I could do a nice jazz joint). The market for this type of venue exists if we would just allow our music and culture to mature. Similar to the way jazz outgrew the big band era, we have to allow hip hop to mature passed the tradition concert venue. The truth is that most true heads are just too old for that.

I hear you Pipo. Those kind of venues and events are definitely rare. I think the main reason for the lack of "mature" hip hop environments is the lyrics. Some DJs get around this by playing hip hop instrumentals at restaurants, galleries, etc.

This topic is all to familiar. We are mature enough to know this is a viable route for hip hop to take but why haven't others realized it also?

I dream of going to that venue as well.

Eric hit it on the nail! DJ's use the inst track to cater to the ears of those who enjoy the hip hop beat but cringe the lyrics. Playing the original before and after the track that samples from it is also a way to appeal to the mature audience.

That waxpoetics issue really made me think about the future of hip hop more than its current state. If hip hop does travel the path which jazz has taken than we will see more venues where hip hop is appreciated. However that also means hip hop will eventually be so marginalized that only niche radio stations and true heads will pay attention to its legacy.

I have no clue where my beloved hip hop is going because I am guilty of leaving it in the shadows of memory bank.
I do know hip hop is not dead and some of the best albums made in the last five years were penned by individuals under 30!

As long as this site is up and running I am sure the mix tape game will live on!

Bummer. Guess I missed the George Benson issue while it was on the shelves.

I agree with Omega, we're an important part of keeping the tradition alive. I'm sure there will be a rebirth at some point. I said well daddy don't you know that things go in cycles.