I Wish You Would - Mixed by DJ Mathew Africa 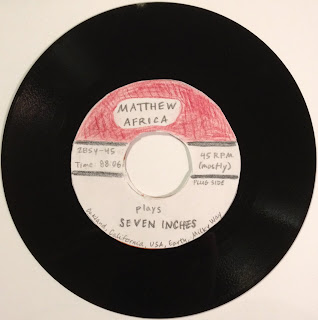 I guarantee a very exciting week of highly recommended mixes this week in commemoration of my final week of summer vacation.  Today's Mathew Africa mix is hotter than socal the last few weeks (which is very hot for those of you outside of the area). Download the mix and read Mathew Africa's very lengthy description of the mix after the jump.

These days I really never play 45 sets except when I'm out in NYC and drop in on friends who do vinyl parties like Mr. Finewine or JBX. The last time I remember doing that on the west coast was for an all-45 45th birthday party for my friend DJ Stef (an idea I may be biting sooner than I wish).

As a warm-up for the 45 Sessions, I made a little mix, pulling out about 100 records and sort of going from there. It's mostly 70s era funk and soul-- lots of classics, some recent favorites, some oddities. Hopefully there's some "oh shit, it's great to hear that", some "wait, what the hell is that?" and maybe an "ooh, he's got that?" or "wait, that's on 45?!?" or two.

This mix started off as a practice run playing 45s and then got more involved when I realized how shitty at it I'd become. It's a lot less like riding a bicycle than I'd hoped.

I used to play 45s all the time. In the late 1990s and early 2000s, Wednesday nights I would often grab a box of them and head down to my friend DJ Kitty's funk party to play a set on what is to this day maybe the shittiest sound system I've ever played. (The Ruby Room's system was pretty awful to begin with but after some noise complaints from a neighbor the management disabled the mixer by gluing caps over the volume and bass knobs.)

But it was good practice. I remember being invited by DJ Shadow to open for him and Cut Chemist when they did their Product Placement show back in 2001-- which was a super-big deal to me-- and putting together an hour-long routine in a day or so and nailing it on the first take. That didn't happen this time. When I rolled the tape I found that I blew almost every mix and it took a lot of work to tighten things up.

Playing 45s is tough. The main thing is that a lot of the music I played doesn't lend itself to mixing. Arrangements are dense and arbitrary (an unfrustrated person would say "creative" or "inspired") and tempos wander all over the place, so mixing is tricky.

Then there are all the technical issues Serato has freed me from remembering how to deal with: that there are no cue points, that speeding up or slowing down a record too quickly can mess up the pitch, that records often skip when you're cueing or cutting them and that you can easily destroy a record through normal use. This is particularly true of records that happen to be pressed not from vinyl but from styrene, a substance that often seems to cue burn at a mere glance. (Case in point, the Leroy & the Drivers 45 heard in the mix: that persistent shhhh sound and loss of high end is textbook styrene. Ugh.)

About the title of this mix: all of the records I played were 7"s, but not all were 45s-- a handful were made to play at 33 rpm, so I named it accordingly. For those who care about this sort of thing, I didn't use any reissues.

Oh lastly, if (to borrow a phrase from the Martorialist) you're one of those poncey bastards who'll only listen to a mix if it's on Soundcloud then we can do that, too:

(Oh wait, I spoke too soon. Soundcloud tells me that my cover image is infringing someone's copyright (?!) and that therefore they won't host it. Ugh. Dispute filed.)