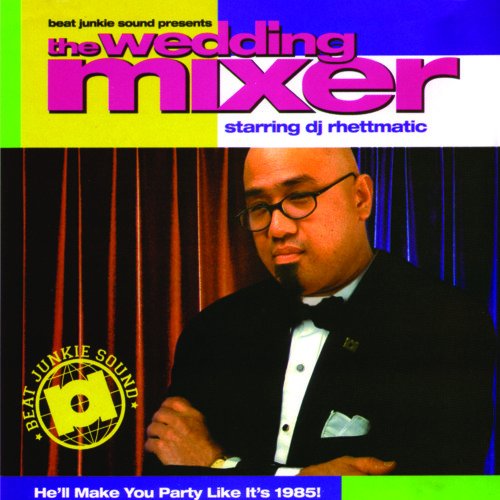 Just in case you slept on this mix when it was originally released, Rhettmatic recently uploaded it to his soundcloud page to promote his "Wedding Mixer" night at The Echo on Valentine's Day.

The History Of The Wedding Mixer Mixtape
Back in 2002, Key-Kool of the Visionaries asked me on behalf of his brother, if I was available to Dj his brother's wedding reception...the only thing is, the wedding was to be held in Hawaii. At that time, I couldn't make it out because I had something already scheduled, and at the same time, Key's brother & his soon-to-be-wife couldn't afford to get a Dj at the last minute. So to help out Key's brother and to serve as a wedding gift as well, I made a mixtape specifically for Key's brother & future wife to play at their wedding reception. The mixtape was filled with all the classic 70's & 80's joints that can get a party going & music that basically Key's brother grew up listening to.
A week went by after the wedding has passed. Key returned from Hawaii and quickly notified me to let me know that the mixtape was a success; everyone enjoyed the mix and were dancing & vibing along to it. That made me pretty happy......Another week goes by & I happens to rent the Adam Sandler's Romantic Comedy movie "The Wedding Singer" because i've never seen it before and wanted to catch up on all the movies I hasn't seen that year. Low and behold, while watching the movie, a certain scene in the movie with actor Jon Levitz sparked off an idea....which led up to the birth of "The Wedding Mixer" cd. And the saying goes, "The rest is history....."
Ever since "The Wedding Mixer" mix cd was released, over the years, I've been asked & requested many times from soon-to-be married couples to Dj their wedding reception because they heard The Wedding Mixer mix cd and fell in love with it. Of course I've never accepted any offers to Dj wedding receptions or Dj'ed a set, unless it was a real good friend of mine or close family members.
Fast forward to now, for 2014......It's been a while since I've spun a long Dj set by myself since my mobile Dj days, as well as my high school & college days. This time, I want to challenge myself to spin a long set in the same vein as his Wedding Mixer mix cd. Come this Valentine's Day 2014, I will be spinning a 3-4 hour set playing all the classic 70's & 80's party joints on some "grown folk" steeze. I have joined forces with my good friends, Footlong Developement, to bring you the Official "Wedding Mixer" party at the Echo in Los Angeles. In honor of the event, I decided to put up the Wedding Mixer mix to give you a feel to what to expect from the official "Wedding Mixer" party. Some of you may actually have the physical copy of the mix cd that came out in 2002. If this is your first time listening to this, I hope you enjoy the tunes....pluse, this mix is a good indication of some of the music I'm going to play on Valentines' Day.
BTW.....I used the original vinyl for this mix & recorded it on old 4-track cassette recorder before I got Pro-Tools & before Serato was actually released.
For Tickets & Info for the Wedding Mixer party on 2.14.14, go to:
www.footlongdevelopment.com
or
www.facebook.com/events/1445885538967838/

Posted by pipomixes on Wednesday, January 15, 2014