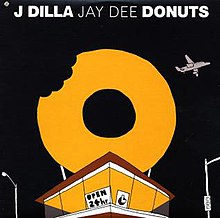 Excerpt: There it was.  Right there on the display shelf with all the other new releases of note: J. Dilla's soon to be legendary Donuts album.  I'd like to say I grabbed the album without hesitation.  In fact, what I'd really like to say is that I copped the album three days earlier (on its actual release date).  The fact of the matter (as I've written several times on this blog) is that my relationship with Dilla (who I originally knew as Jay Dee) was always complicated.  I loved Dilla's production on Slum Village's first two albums (hell, I still have my test pressing of Fall in Love that I bought at SV's Fantastic Vol. 2 release party).  However, I also associated Dilla as being the producer behind ATCQ's worst two albums and Common's transformation from "hungry" MC to "flower-power" MC.


February 10, 2006 - Before the blog to change all blogs was established; before the full-time job; before the dissertation was approved; before social media took over the planet; before people stopped arguing about whether software was superior to hardware (or vice versa); and before donuts were associated with anything other than the surest way to diabetes and a heart-attack.

February 10, 2006 was a Friday; and I remember it well.  At the time, I was spending 95% of my day either on my tables or driving the freeways of Southern California traveling from college to college, getting my adjunct grind on.  No joke, I was logging 500-600 miles a week commuting between campuses and trying to put together as many classes as I logistically could to pay the bills.  I remember February 10th, 2006 very well for the simple fact that it landed on a Friday.

Friday night is obviously the least desirable time to teach a class.  For that reason, it was a Friday night class that I was first able to secure as an inexperience professor, fresh out of grad school.  As the miles traveled began to wear and tear on my not so trusty 2002 Honda Accord (yup, Honda makes lemons too), my parents would generously lend me their car to make my 80 mile round-trip commute to my Friday night class.  For those unfamiliar with Socal freeways, the 40 miles to work in rush hour traffic typically took me about 2 hours, and the 40 miles back from work (around 10pm) typically took me no more than 30 minutes.

My normal Friday routine during this time consisted of me driving about 10 minutes to my parents house to swap cars; get a little home cooking from mom; a hug and kiss, and I was off on my 2-hour journey (5-10mph at-a-time) to teach my last class of the week.  On this particular Friday night, all of my CDs in my CD book looked stale and uninspiring.  As a result, I made a quick stop at the nearby Tower Records (yup, still open at the time) to buy some new tunes for the commute.

There it was.  Right there on the display shelf with all the other new releases of note: J. Dilla's soon to be legendary Donuts album.  I'd like to say I grabbed the album without hesitation.  In fact, what I'd really like to say is that I copped the album three days earlier (on its actual release date).  The fact of the matter (as I've written several times on this blog) is that my relationship with Dilla (who I originally knew as Jay Dee) was always complicated.  I loved Dilla's production on Slum Village's first two albums (hell, I still have my test pressing of Fall in Love that I bought at SV's Fantastic Vol. 2 release party).  However, I also associated Dilla as being the producer behind ATCQ's worst two albums and Common's transformation from "hungry" MC to "flower-power" MC.

In retrospect, I can admit how wrong I was.  Dilla was simply ahead of me in terms of where I was at the time (as far as my musical aesthetic).  I'm secure enough in my Dilla fandom to admit I wasn't always "down" (at least not 100%).  With the cult like status that Dilla has achieved in death, it's easy to forget where he was musically in 2006.  2006 was six years removed from the apex of Dilla's commercial success.  It was six years after LWFC and its single The Light, had blown-up.  It was six years after SV's Fantastic Vol. 2 took the underground rap world by storm.  Jaylib's Champion Sound was considered a commercial flop in 2006, and Rough Draft (Dilla's first shot fired in terms of letting the world know the artistic direction where he was headed) was largely ignored by even hardcore heads such as myself.  I can't tell you how many times I skipped passed Rough Draft and Dilla's now infamous bootleg, instrumental LPs while record shopping at Aaron's Records and Amoeba.

It wasn't like I was completely ignoring Dilla's production in 2006.  The Red, F*ck the Police, Much More, and The Genesis were all in heavy rotation on my turntables back in 06.  However, the perception (at least in my head at the time) was that Dilla was an artist on the decline.  Now, before the Hip Hop Gods strike me down on the spot; it's important to remember the context of 2006.  The late 90's and early 2000's were not kind to many hip hop legends.  Seeing legends "fall-off" during this time period was relatively commonplace.  I could list off an array of cringe worthy albums/singles released by legends that were the product of overt attempts to "cross-over," or just good ol' fashion wackness.  However, let's not go there because I think that would be too painful for many of us to re-live.  Bottom line, it wasn't crazy for me to think that Dilla had fallen off (though I was as wrong as wrong could be).  Of course, we now know that Dilla never fell off.  Instead, he reinvented himself in a raw, back-to-basics production style that was in many ways the antithesis of what his signature sound became known for.

With all that said to justify my hesitation to cop Donuts, something about the album said; "buy me."  Though I bought the album on the day of Dilla's death,  I was not aware of his death at the time of purchase.  The internet was very much around in 2006, but 2006 predated the smart phone and the explosion of social media.  In other words, information was traveling fast then, but not nearly as fast as it travels today.  I saw a few posts here and there on message boards about Dilla being in poor health.  I recall seeing a photo/video of Dilla's last performance in a wheelchair, but the severity of his health condition was mostly unclear and unconfirmed (as far as I knew at the time).

Long story made a little less long; I bought Donuts, took the plastic wrapping off the CD, and put the disc into the CD player of my parents' car.  Immediately, Donuts sounded different than anything I had heard at the time.  It took my ears a minute to adjust to the uniqueness of the sound, but all the while I knew that I absolutely loved what I was hearing.  It was everything I wanted in an album, but didn't necessarily know it at the time.  Loop-based beats, mixtape style sequencing, quick sound drops, and perfect imperfections.  It was freaking glorious!  As I was listening to Donuts for the first time, I remember thinking to myself; "Is this what Dilla has been up to?  Is this what I've passed up countless times at the record store?  Shame on me!  Shame on me!"  About halfway through the album, I just couldn't bare to keep all this wonderfulness to myself.  So I did what I normally do when I hear great music; I called Omega:NYC to tell him about it.

I don't remember the specifics of the conversation.  However, I do remember not being able to finish raving about the album before Omega broke the news; Dilla had just died.  I was certainly saddened by the news, but not necessarily surprised.  Even though I was only about halfway through the album, something about the album said to me that it was just too good to be true.  Whoever, or whatever was behind the making of the album; could never, or would never be replicated.  The laws of nature simply don't allow for that much goodness to exist.

As we all know, the rest is now history.  Dilla's final reinvention (largely encapsulated with Donuts) has spawned much of the quality music that has been released in the last ten years.  Though Donuts has inspired a new generation (and arguably a new genre) of beatmakers; most instrumental LPs are ironically overlooking what made Donuts so great.  It should not be forgotten that the running time for the original version of Donuts was only about twenty minutes.  The expanded version that we all know is around forty minutes long.  However, even in its commonly heard expanded format; tracks rarely play for longer than 90 seconds and though the songs are loop-based, repetitions are few and far between. Dilla knew his beats were fire and he didn't have to let the beat repetitiously play for four minutes to prove it to the listener. Perhaps it was the urgency of his health condition while making Donuts that caused the album to be as succinct as it is. Frankly, I do not know. What I do know is that I played the album in its entirety last night for the first time in over a year and listened with a relatively fresh set of ears. Damn, what a masterpiece.
Posted by pipomixes on Wednesday, February 10, 2016