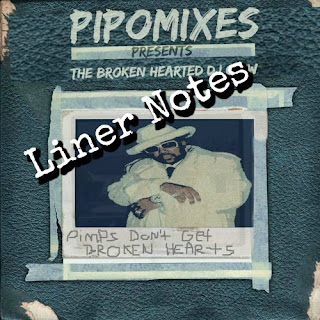 I thought I might try something new and provide liner notes to some of my more popular/personal mixes.  I personally love reading the backstories to albums, and they always make me re-listen with a fresh ear.  I'd love to sit down with some of my favorite deejays/producers and ask them questions about their music-making process.  However, that's another task for another day.  I figure my Liner Notes Project should inaugurate with my most personal mix to date, Pimps Don't Get Broken Hearts.

The mix was inspired by the end of a twelve-year marriage (as well as the end of an over twenty-year relationship).  My marriage was essentially over by New Year's Day 2016, and papers were signed sometime in April 2016.  However, it wasn't until June of that same year where my ex-wife moved-out and I would "officially" begin my post-married life.  Unlike many fathers in similar situations, I was fortunate that both my ex-wife and I were able to agree to share joint custody of our daughter.  For those unfamiliar with divorce speak, joint custody basically means both parents have equal custody.

Because my ex-wife didn't physically move-out until June 2016, it wasn't until then that I first experienced my daughter sleeping in a different home than me. It was during the 2016 summer months that the mix was actually mixed.  However, the mix was conceived as early as January 2016.  Almost all of the songs used in the mix were brainstormed during the winter and spring months of 2016.  I identified various songs (mostly hip hop oriented) that related to heartbreak/loss/marriage.  Even while compiling these songs on my phone during these months (which would occur randomly for the most part), I was never fully committed to a "heartbreak" type mix.  The "brainstorming" process was an intellectual exercise, more so than anything else.

From Brainstorming to Mixing

Anyone married with children knows free time is more rare than spotting a snow leopard.  Ironically, the little free time married parents get (individually), is often riddled with guilty thoughts akin to how you used to feel while skipping class.  It never quite feels right to not spend your time with your kids or spouse, so it's hard to enjoy the rare episodes of "me" time.  One of the few positive aspects of being divorced is that you don't feel "guilty" during the days/nights your child isn't with you because it's legally mandated.

Fast-forward to June 2016: Suddenly, I've got all sorts of free time on my hands.  Naturally, 90% of this newly found free time has been devoted to my turntables.  Initially, I was working on another Dr. Dre mix (which later morphed into the DeChronStructed mix).  However, I just wasn't into it at the time.  Obviously, the end of a marriage is going to cause a lot of introspection for all parties involved.  I am certainly no exception.  With all sorts of thoughts and emotions occupying my mind, I wanted a way to express it all.  As I wrote in the initial description of the mix, the only artistic tool that I possess is being a DJ.  Perhaps in a different life; I could have taken all these emotions to canvas, or wrote/played a beautiful song.  But, those aren't skills that I possess.  I am a DJ.  My tools are knowledge of music, turntables, mixer, and Adobe Audtion.  So, I said; "fuck it, I'm going to express how I'm feeling through a mix."

Dope DJs are dope DJs not necessarily for how they mix music, nor for what music they mix.  Dope DJs are dope DJs because of how they mix the music they mix.  I don't claim to be a "dope" DJ because that is for all of you to determine.  However, I certainly try to be DOPE.  In this case, I wasn't trying to make some brokenhearted mixtape/tracklist that I could have made long before I ever got my hands on a pair of Technics.  I was going to do what dope DJs do; take songs about heartbreak (some of which are corny) mix them in a way where the final product would be quite different from the sum of its parts.  Through the process; I wanted to make being heartbroken, funky.

The cover and title of the mix come from J-Zone's Pimps Don't Pay Taxes album.  J-Zone's rap persona of a pimp was/is ridiculously absurd.  To a certain extent, the average DJ's persona isn't much different.  All DJs claim to be the best/baddest/know everything about music/never lost a battle/never had a bad night at the club etc...  In J-Zone's case, his character is so obviously a spoof that it actually reveals a certain level of vulnerability in its ridiculousness.  Obviously, the mix reveals far more vulnerability than you'd typically get from a DJ.  I wanted to hint the mix's vulnerability through the title and cover art in a similar way to J-Zone's pimp, rapper persona.

I'm not going to explain too much regarding the music because I believe the music should always speak for itself.  However, I'll add a few notes.

The vocal drops used throughout the mix come from the movie Blue Valentine.  Though it's an excellent film, Blue Valentine is a thoroughly depressing flick that portrays (all too accurately IMO) the pitfalls of marriage.

With the exception of the very first song, none of the songs used in the mix were actually "couple" songs.  Had I actually used "couple songs" my ex-wife and I shared; the mix would have most certainly gone over the deep-end in corniness.

By far, this is the mix in which I've received the most response from the listeners.   In addition to just getting a lot of responses from those who listened; the responses were quite extensive and thoughtful (mostly communicated through personal emails).  Heartbreak is a universal emotion/experience; so I guess the level of response shouldn't be too surprising.  However, I'm still taken back by how many people (all of which are strangers to me) took the time to write such thoughtful emails.  Thank you.  All of the response were very much appreciated.

I forget who, but someone commented that this was my own version of Marvin Gaye's Here, My Dear.  Believe it or not, I had never heard the album prior to making this mix.  In fact, I am ashamed to admit that I hadn't even heard of the Marvin Gaye album until reading the comment.  Of course, I've listened to the album a few dozen times since.  I'm for the most part glad I hadn't heard the album prior to the mix.  Had I been familiar with the album; I am certain that the album would have been too alive in my subconscious, causing the mix to sound like a poor imitation.

There are often various things I want to change, or wish I had done differently, when I go back and listen to old mixes.  With Pimps Don't Get Broken Hearts; there really isn't anything that I want to go back and change.  If forced to pick something, I wish the mix were longer.  However, I'm not sure I could have really made the mix longer without compromising its quality.

This was certainly a mix I was afraid of releasing, and even more concerned about how it would age.  A year later; I still stand by my product.  This was me circa summer 2016, and where I was emotionally at.  I did my best to communicate that through the only means I know.  I wish to hear better, more capable deejays do the same.  Those would certainly be mixes I would like to hear.

For those curious, I have no idea if my ex-wife has actually listened to the mix.  She once said something that could have been remotely interpreted as a reference to the mix.  But, that's as much as I know.  Doesn't really matter, anyway.  The mix was made for me and all those who might find something in it that speaks to them.  Listen (or listen again) to Pimps Don't Get Broken Hearts.
Posted by pipomixes on Tuesday, September 05, 2017

Thank you for sharing.