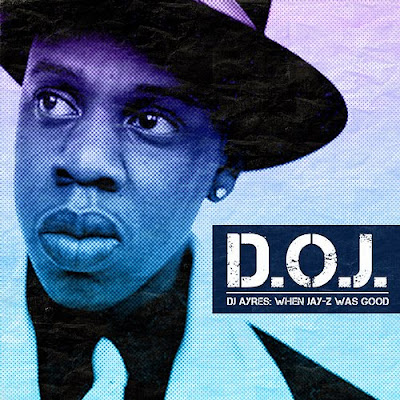 I haven't actually listened to this mix quite yet, but DJ Ayres never dissappoints. DJ Ayres explanation of the mix below.

Here are a bunch of my favorite Jay-Z songs, mostly album cuts with a few freestyles and secret joints thrown in for good measure. Since Jay “retired” and came back, his music hasn’t sounded as urgent or hungry to me. He sounds like he’s coasting along, so I wanted to go back and pull out a bunch of his music that made you bob your head, marvel at his flow, puff out your chest, or even raise the little hairs on the back of your neck. The feelings you got from songs like “Where I’m From,” “D’Evils,” “1-900-Hustler” and “You Don’t Know.” Not included: #1 singles you’ve heard a million times, lazy one-take flows, lyrics about inventing the button-down shirt, songs dissing rappers who would later be signed to Jay-Z’s label, and songs produced by Eminem.

This is actually a pretty damn good mix, even though I don't personally agree with Ayres title "DOJ - When Jay-Z Was Good". He never really fell off, just grew older/wiser in my opinion. I mean hes still better than the 90% of rappers out there...

I tend to agree with you though I haven't been crazy about the last few albums (Kingdom..., & whatever the last one was called). However, I still think that the American Gangster LP is the last/most recent hip hop classic

I will download this on the merit of the description alone.