Millenium Countdown Side A - Mixed by DJ Rhettmatic 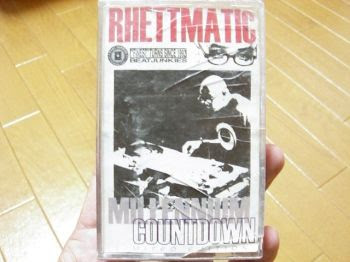 Rhettmatic's description of the mix below.

This is an old cassette mixtape that I did in December 1999 for Manhattan Records (one of the best record stores/distributors in Japan at the time).....it was a limited edition mix where you only get purchase it in Japan. They would get different Djs like Dj Spinna & Dj Premier to do an exclusive mix for the Japanese market; I was lucky enough to do one.

Everyone that did a mix for Manhattan Records had their own specific theme....so i had to think of one. Being that the year 2000 was around the corner, I decided to do a classic Hip Hop mix from 1990-1999 & also include some classic West Coast Independent Hip Hop (i actually sneaked in my 1st record that I ever produced on wax with Key-Kool feat Ras Kass & LMNO called 'E=MC5').

I was supposed to do a 2 part series but unfortunately I was able to do only one with the years 1990-1995 (the 2nd series was to be from 1996-1999 but Manhattan Records decided to stop making exclusive cassette mixtapes....hmmm, maybe i should do one still). I actually made this particular mix in the same vein as my 'World Famous Beat Junkies Vol. 2' mix...

Alot of people may have or may have not heard this mix....so ironically, after another 10 years had past, here's a look into an old cassette mix of mine titled "Millenium Countdown".

Millenium Countdown Side A - Mixed by DJ Rhettmatic (download)

i thought this mix might be worthy of your blog, also if you ever come across volume 1 of the jazz flava series you should post it because this (2) and the third are incredibly amazing