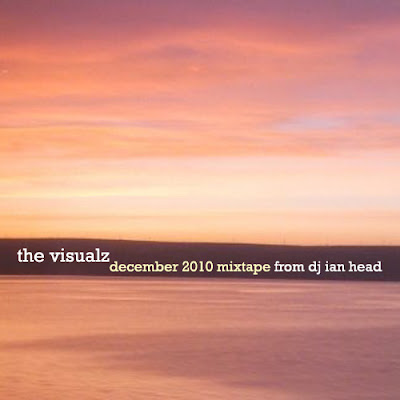 Below is Ian Head's linear notes of the mix.

All Natural - "50 Years (Instrumental)"
I forget where I first heard this, but the piano loop was instantly like, whoa. Incredible. Having been listening to lots of masterful Primo piano-chopping, it was nice to hear a drawn-out, full loop - some vintage Ramsey Lewis, although I didn't know it at the time. All Natural just kind of appeared, and I remember buying their first CD (which came with a cd-sized "book") at Other Music. The cover art, featuring the duo seated in a Chicago coffee shop (or health food store?) looking up at the camera - it was a beautiful, simple cover. I'm a big Capital D fan - another song off here, "It's Ok," is one of my all-time favorites - but this beat is what put me onto the group. Beautiful.

DJ Spinna - Compositions Instrumental
Before heading to New York, my man Jumbo put me onto Spinna. This was in 95 or 96, and we were chillin in the Lincoln High School cafeteria listening to beats. I was asking him what producers he was checking for, and J was like "Yo, you gotta check for this cat DJ Spinna, his stuff is wild right now." Lo and behold, on one of my first trips to Fat Beats, there was a DJ Spinna record in the crate titled simply "Compositions." Instant pick-up.

DJ Honda ft. Common "Interlude"
So a lot of these records on this mix remind me of classic stores I used to frequent in New York. This is the first record I bought at Fat Beats. I'm not sure why I was attracted to it, but I vaguely remember feeling I needed to cop something, and I didn't really know any of the many underground artists lining the walls, so I grabbed this Honda record that had a bunch of well-known acts on it. This opening Common cut was pretty solid - short and sweet, probably my favorite off the vinyl. When I found the Milt Jackson record it sampled, I remember always playing the two together whenever I had a chance - radio shows, mixtapes, etc. Just some real classic 90s hip-hop feel.

DJ Shadow "What Your Soul Looks Like"
The story goes like this. I woke up at 6am in an apartment owned by Peter Gabriel’s daughter in the West Village in the fall of 1996. I had fallen asleep on the living room floor while watching “Drunken Master II.” I woke up a friend of mine who was asleep on the couch, and we wandered out into the streets in search of DJ Shadow’s new import-only album “Entroducing,” which had just been released the day before. Half-awake, we stumbled into a diner for pancakes and realized that it was 7am and record stores don’t usually open until at least 11. Not to mention we weren’t exactly sure where all the record stores were, and this was before iPhones and Google. So we wandered the village looking, waiting for places to open, watching the city slowly awaken. But once the stores did open their doors, most didn’t have the album, let alone knew who DJ Shadow was. Someone at Fat Beats told us “We only sell hip-hop here.” Finally, dead tired, we found ourselves in DANCE TRACKS, its giant purple and black sign a beacon that has since disappeared from the East Village. And there it was, just in – I remember putting a copy of the vinyl on the listening booth turntable. “Entroducing” will always remind me of fall weather, New York City, and 1996. It’s hard to choose one joint to play off here but this is a great one, with that simple but deep Heath Bros saxophone loop.

Abstract Tribe Unique "Them Thats Got"
The one New York store in the 90s you could count on usually having some of the more obscure West Coast hip-hop was Other Music, which is still in existence long after it’s giant neighbor, Tower Records, has vanished. I used to scour its bins for LA and Bay-area rap that Fat Beats didn’t carry. This was one of my favorite finds – on pink and blue marble vinyl too. Love Ab Rude covering Billie Holiday.

Siah and Yeshua Dapo ED "The Visualz"
Bobbito’s Fondle ‘Em record label’s first seven or eight releases are certified classics. One of the best underground records of the 90s, this EP was incredibly refreshing from start to finish. It reminds me of visiting Bobbito’s Footwork store, where he’d have all the Fondle ‘Em releases on one wall together near his selection of custom-made classic t-shirts. Often he’d be in the store, dancing to James Brown or talking about sneakers. Anyway – this song is great.

DJ Premier / Jeru "Me or the Papes (Instrumental)"
I almost put the b-side “Me, Not the Paper” on here but this felt better in the mix. Dope twelve-inch from not just my favorite Jeru album, but one of Primo’s best as well. Reminds me also of Premier’s classic mixtapes of the era. P-P-P-P-Premier. P-P-Premier.

Natural Resource "Negro League"
Is this the greatest independent hip-hop 12” of the 90s? Is What What (now Jean Grae) still one of the most underrated emcees ever? What happened to the Makin Records label? How fresh was the simple label artwork on this piece of vinyl? What about that classic Cannonball Adderley bonus beat?

Prince Paul "If 9 was 6"
Before finding it on wax, I originally had this song on the CD version of a Bill Laswell compilation “Altered Beats” that I bought at the now vanished Virgin megastore up in Times Square. It was a pretty dope comp of instrumental, downtempo beats and cuts, with everyone from DJ Krush to Paul to Rob Swift. It was hard to decide what to put on this mix, but I felt I needed to drop something from Paul here. His beats just have so much feeling even when he’s being humorous or strange.

High and Mighty "Hands on Experience (Instrumental)"
A goofy Stretch and Bob classic, I remember hearing it on their show and laughing out loud. As tempting as it was to play the vocal version, I felt like it might be a little jarring to the mood of this mix, so I just played the instrumental. Plus Might Mi had some great beats.

Automator / Dr. Octagon "Moosebumps"
Several songs on the Octagon album got a lot of play but beyond Keith’s craziness, it was Automator’s sick sample selection and hard drums that really drove the album and made it the cult classic it is now. This was one of those interludes that just grabbed you when you heard it, with the recognizable strings sample.

Automator "The Truth"
I played the other half of this track on my December 2007 mixtape. Hard drums. Jazz samples. Biz Markie. This track used to stay on loop. I remember I ordered the CD through the mail after looking up what else Automator had done.

The Roots "One Shine"
By the mid-90s, most people were buying CDs but I was still buying tapes, since I still used a Walkman. Plus tapes were just classic. So rather than buying “Illadelph Halflife” on wax or CD, I copped the cassette. And it stayed in the deck again and again. By far my favorite Roots album, it’s funny that this “One Shine” song mentions the sun, since I associate this whole album with walking around city streets at night, or looking out the window of the Metro North at the city late at night. A really soulful track, had to end things here.