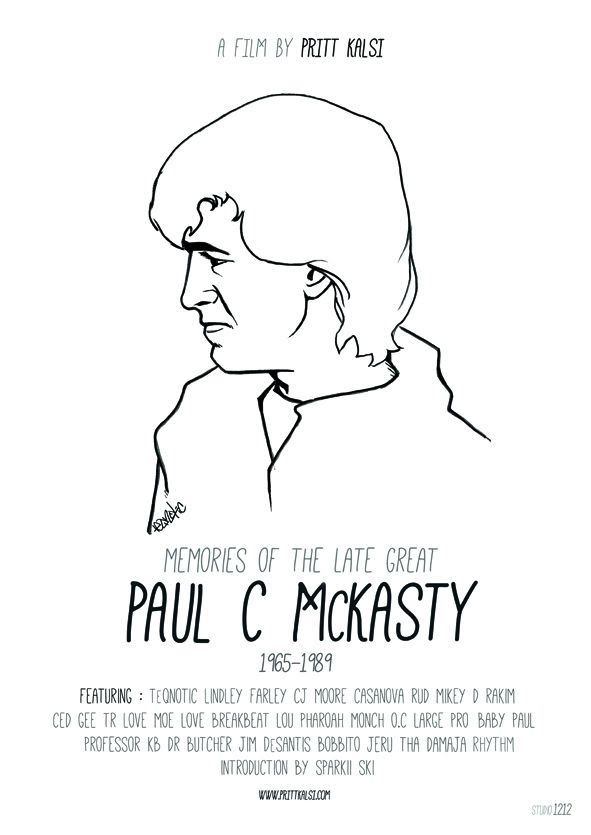 This is by all means not the definitive documentary or story of Paul C McKasty. The Legendary producer from Queens NYC who had his life cut short aged only 24 years old. This is a film put together from a footage I had accumulated from 2000 to April 2013.

Friends, Family and Fellow artists share some personal stories of their time with the man. I am as you may know a record collector and Hip Hop activist. I can admit that I never knew or had every record that Paul C had touched, I have plenty of them, not all of them. In the late 90s I had got to know Nottingham based group the P-Brothers very well.

I was around as Ivory made his now notorious ‘Here No Evil’ CD. He used to show me records I had missed out on, a lot of Paul C’s productions. Prior to that I had gone to New York to start work on my film ‘The Men & Their Music’. Chronicling the birth of New School Hip Hop, from 86 on. Interviewing Ced Gee and Moe Love they spoke highly of Paul, this was the beginning of filming a chapter on the man from Queens.

As I began editing the film the Chapter on Paul. It was so long that it manifested it self into its own film. Learning so much more about the man, watching back the footage of CJ Moore and how heartfelt he spoke about his friend. I felt that this was a story that needed to be shared. Read more HERE. Watch all three parts to the documentary HERE.

I found it brilliant when they were talking about Paul's innovation of using compression. I always wondered how Ultramagnetic's 'Critical Beatdown' got its ultra-crisp, timeless sound. It's 'cuz of this genius, Paul C (whose name I had never heard of). You can definitely see the example set by Paul C, and how Large Pro kept up the good work. They are masters of sampling, how they take a good drum sound, like a James Brown sample, and making it hit harder and sit better on the track than anyone else making beats. Without relying on something prepackaged like layering 808 sounds over the sample, you get a sound that is just so unique and really is above all else what makes gritty underground Hip-Hop so good. Just my 2 cents.