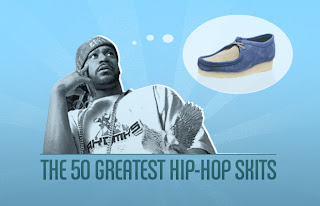 Complex Magazine just posted a compilation of the 50 greatest hip hop skits (read  here).  Most of the classics are disected on this list.  However, I was surprised not to see two of the more memorable skits (at least for me and my circle of friends at the time) from Biggie's Life After Death album omitted.  Read which skits got omitted after the jump.
Skit #1 - No inclusion of the intro to Nasty Boy.  How can you have a 50 greatest skits list and exclude Biggie discussing how he "shits on a b*tch."  I remember hearing that at 17 and wondering to myself, "Really?"  "Is there something I'm missing?"  "Is this something I should start doing?" Amazing how influential a rap skit can be on a young, impressionable mind.

Skit #2 - No inclusion of the "I'm Gonna Kill You" skit.  Can't tell you how many times I would call a friend and start mumbling in a muffled voice, "I'm gonna kill you."  In which my friend would instaneosly impersonate Biggie's lazy "word" over and over again.  Ahh memories.  With that in mind, I was doing my daily run the other day and I overheard this late teens/early twenty-something dude (with girlfriend and baby next to him) getting into an argument over the phone.  I could hear the kid yelling into the phone over and over again "I'm gonna kill you nigga."  As heard this idiot repeating his threats I kept wondering if the dude on the other end of the line was repeating Biggie's "word."
Posted by pipomixes on Tuesday, December 06, 2011

Interesting, something that's been on my mixtape 'to do' list for a long time is a mix of my favourite skits. I think it's going to be called 'Hudson On 'Ludes" whenever it gets done.