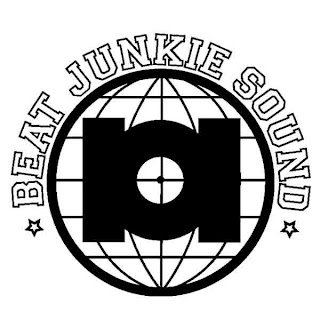 Offliberty.com is your friend. Stream after the jump.

Just recently while doing some cleaning in my home studio, I found a bunch of old cassette tapes which were the aircheck tapes of the Beat Junkie Hour......This is an old recording of an episode of the Beat Junkie Hour Radio Show on KWIZ 96.7FM back in 1993/94 KWIZ was a type of station that you had to pay to play on the air, and at that time, it was $200 or $300 for an hour slot. Even though there was alot of us, we really didn't have the money to always pay for it, so we would get some sponsors to help us pay for our airtime (as you will notice with some of our "commercials". LOL!).....As you can also tell from the recording, we were pretty young, too excited to be on the airwaves, and horrible on the mic, but we were playing alot of the classic underground as well as breaking some new music from the West Coast; we were the first ones to play the Nonce, Ras Kass, and Dilated Peoples when they were known as the Fatliners. This is about the same time when the Baka Boyz first came to LA and started working at LA's Power 106.

Around this time, the crew was starting to grow, as well as starting to make a reputation in the Dj Battle circuit like DMC & the Rap Sheet Battles....also a little tidbit of information; we had 3 short-lived members in the Beat Junkies at that time: Special J, Dj Sweet Pea (now know as the producer Paul Poli, who produced such hits for the Black Eyed Peas. Christine Millian, & Ashanti), & Dj Rectangle....yes, THAT Dj Rectangle! And this is before Babu & Mr. Choc became official members of the Beat Junkies....officially, there are 13 members in the Beat Junkies.

On this particular episode, you actually get to hear Beat Junkie members that you may or may not be familiar with: Dj Curse, Tommy Gun, & Dj Sweet Pea, as well as J & myself in the mix and the mic. We also shout out other members like Shortkut, D-Styles, Melo-D, Icy Ice, Symphony, Havik, & What?! Most of the time, when you listen to the show, we mostly be cracking jokes on each other, do alot of shoutouts, try to pick up on chicks on the phone, or even hanging up on them....but you can tell we were having fun.

While transfering this from casette to Pro Tools, listening to these tapes reminded me of how young and carefree we were back then; i also cringed at how we sound on the mic (i must've said "yknow what im sayin" at least 20 times) as well as my mixes. J always kills it, even back then....boy, have times changed...LOL!!

I'll try to upload more recordings of the the show later down the line....I'm still going thru tapes and transfering onto protools. Anyways, here's a little piece of Beat Junkie History for you to experience.....enjoy!